For our Indianapolis 500 party on Thursday, we will serve chocolate chip cookies and milk, to connect with the race winner, and as a typical American snack. Josh found chocolate chip cookie mix on sale at Target ($1.16–makes 3 dozen!)so Steve lugged six of those with him from Cincinnati to Wangsa Maju. Then we started figuring out how to bake them.

The church kitchen, typical in Asia, has a two-burner gas stovetop but no oven. Two of the members brought their “portable ovens” for us to use. I couldn’t even imagine what they meant; how could an oven be portable? Well, they are approximately the size of a large crock pot and can bake one layer of a cake. We figured we could cook ten cookies at a time and get them done in about 20 cookings. We were sort of right. 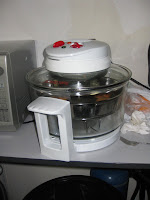 First, we had to calculate what 375 degrees Fahrenheit would be in Celsius. Gina’s handy iPod told us it would be 197 degrees C. The package said for 8-11 minutes, so we tried that yesterday. The first ones looked pretty good from the top, but they were uncooked in the middle. The second batch we left in longer, and the three in the middle were too brown to serve (but not to eat, of course!) So from then on we put eight around the edge and none in the middle. I hope you can see the cookies in the picture of the open oven.

So we have finally figured out a routine. We mix the softened butter, egg, and mix. Then we refrigerate it until it’s firm enough to roll into balls. We can bake 8 flattened balls at one time in one of the ovens. The other doesn’t have a pan with it and the only pan we have only holds four cookies at a time. This is a slow process! But we are getting them done. When we take them out of the oven–now down to 150 degrees C.–they are still a bit gooey in the middle. So we cool them upside down and then the soft middle stays in as it cools. They look pretty good from the top, but definitely not typical from the bottom. 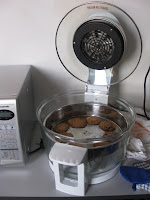 We have not allowed ourselves a single bite today. We’ve tried to cook every single bit, not even popping that occasional bite of cookie dough in our mouths as we rolled the balls. Confession time: So when Doreen escorted two readers into the kitchen and offered them a sample, I yelled, “Oh, no! Not until tomorrow!”

Then I immediately realized that that really wasn’t the Christian attitude I should be displaying, so I laughed and apologized and told them to have a cookie. Last week we had 63 at the party, so we’ll have enough for at least two each. I’m sure it was my jealousy exerting itself when I saw Bee Ping pop that warm cookie into her mouth!

We’ve lost track of how many we did today, but probably around 100. Gina, Kinley, and I worked every minute we didn’t have readers or weren’t eating lunch. Kinley was a trooper when we were busy with readers. Today Gina and I each had three readers, but tomorrow we have about twice that many, so it was imperative that we bake a lot today. (I admit to not being too disappointed when one reader canceled and I could keep baking.) We’re glad to bake some tomorrow because the smell is so wonderful. But we’ll have to leave the kitchen by 4 because the church women come in cooking for dinner for the college students that come to the party.

At this point, we’ve cleaned up all the buttery mess, heating water to be able to get all the butter out of the utensils and bowls. And speaking of utensils, there is no such thing in this kitchen as a pancake turner–or whatever you call the implement for removing cookies from the pan. So that’s also been a challenge.The whole process has made us appreciate our large ovens and cookie sheets at home.

So, believe it or not, that’s the short version of our baking day. When I get home you can ask me for “the rest of the story.”

Perhaps next I can post pictures of our party and of our readers eating chocolate chip cookies for the first time!