Our Indianapolis 500 party was great fun! We played games connected with driving and racing and watched video of some Indy 500 races. It’s great to have a large screen and internet access to show pertinent video. (At the baseball party, we showed video of a Goofy cartoon explaining the game of baseball and a video showing how Cracker Jacks are made. Ever noticed that Cracker Jack popcorn is round and doesn’t have all the little offshoots of regular popcorn?) 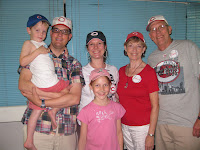 We sing an appropriate song at each party, so of course we sang “Back Home Again in Indiana” for this one. (Last week Knox first sang a solo of “Take Me Out to the Ballgame,” which you may have seen on YouTube, and then led us all in singing it.)
The chocolate chip cookies and milk were a big hit. Of course we had to offer milk because that’s what the Indy 500 winner gets. After all our struggles, we were glad everyone seemed to like the cookies. People here do not drink milk, but they did with their cookies and no one complained. 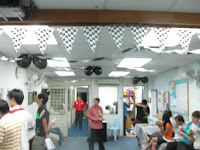 A popular drink here is Milo, which is a chocolate-flavored beverage with some milk product in it, similar to Nestle’s Quik. Knox loves it. His other favorite drink here that Kinley loved at that age is yogurt drink—much more liquid than in the U.S. Cans of Coke Light (no calories) and Pepsi Light are usually available at the same price as a can of Coke, but Coke Zero, strangely enough, costs three times as much. It’s imported and the other is canned locally, I think.
Another food note: in the grocery store I couldn’t find a bottle of mustard in the usual places. I finally found it in the “Western Foods” aisle. “Western” here refers to anything from Europe or America. In other words, everything here is eastern and most commonly referred to as “Asian.” We will be told that something is “the Asian way” of doing something. When we eat out on Sunday nights, there are often large families eating out together. The Chinese restaurants have enormous round tables, often with a lazy susan turntable, that seat up to 16 people. “Sunday night is family night when Chinese families eat out together,” they say. By “families” they mean at least three generations, sometimes four. It’s very sweet to see all those relatives talking together and sharing their meal.

Work days here are very long. Stores are open from ten till ten, as a rule, every day. Evidently they have not adopted the idea of shift work here. You work those 12 hours or not at all, according to one of my readers. So many Chinese Malaysian women are housewives for that reason. Many Chinese families have maids that help extensively with the children. It’s possible that parents who both work outside the home will only see their children on the weekends since the maid may get them up and off to school, and they have been fed and are back in bed by the time the parents get home.

One Chinese mother whose youngest is fifteen told me that she has never cared for a child by herself from morning till night. She also said that with their long working hours, they sometimes feel they hardly know their children. That’s understandable, with such long days.

Most of the people here are very trim. I’ve only seen about 6 or 7 obese people on the entire trip, and two of those were Caucasians. I’m not sure how that works since local foods feature rich rice and noodle dishes. Unfortunately, the local food is not getting me down to local size!