When in high school, there are few indications of what a person will be like 30 or 40 or 50 years later. Will the compassionate person still show kindness to all? Will the talkative one still talk a mile a minute? Will they still be complaining about their mothers? Will the homecoming queen be as beautiful as ever? Will the nurturer have lots of children? Will the academic one have advanced degrees? Will I still be a little jealous of this or that one? (We didn’t have any rich ones, so there’s no wondering if the little rich girl is still spoiled.)

In the first week of June, last year and this, some of those questions were answered. I’d occasionally seen one of my high school girlfriends, because she still lives in our hometown. The others I hadn’t seen since 1965, and had not even stayed in touch with all. 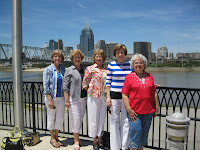 The compassionate ones still showed concern, offering to bring food or to cook while here, cleaning up after themselves and others. We all talked, but no one monopolized. The most common comment was, “Well, getting back to what I was saying about…,” because every comment triggered a sharable thought from one or two. No one complained about mothers, for only one is still on this earth. That daughter, however, has moved closer and not told her mother she’s now two miles away and not twenty. There was talk of mothers, though, lots of it. Their quirks, their remembered comments, their personality traits, their faith.

The homecoming queen was still beautiful, especially on the inside. (We admired her cloud of white hair, keeping just the right amount of curl as we remembered. The rest of us admitted to coloring our hair–no longer anything to be ashamed of as it was for our mothers.) We were surprised to discover her hidden talents. As one said, “Who would ever have thought she’d be such an Earth Mother?” Her four children, ten grandchildren, and two great-grandchildren keep her busy, as she cooks for all every Sunday and helps out in numerous ways in between. Her faith sustains her through all the trials connected with many children and aging parents and the death of her mother. Her husband cares for her nonagenarian father daily, a blessing to the whole family. (Though I admit to a little resentment that my peer is a great-grandmother! I don’t see myself in that category.)

Four of the five of us are still married to our original spouses, married back in the days when marriage preceded living together and having children. One has no children, but she and her husband nurture friends and the children of friends and cared for her mother for years.

Some have had adventures, domestic and foreign. Some have quietly raised families faithful to the Lord, serving in their parents’ paths. From VISTA volunteers to teachers to nannies, all have served others in some way. I am proud of all of us, for the lives we’re living and for the faith we show in our conversations. “That was surely God at work!” and “I don’t see how people make it without faith in God” were common responses. I don’t recall our being all that spiritual in high school, but we’ve come around to it, following our own parents.

None of us lives more than five hours from where we grew up, and all are happy with where we are in life. We enjoy friends, family, and faith. What more could anyone ask?