My Uncle L.D., age 90, has been in the hospital for a week and I have not checked on him. I got email reports from another niece and had been extra-busy with a houseful of weekend guests, so I had excuses.

Today I called the Nashville hospital patient information number and asked for information on Luther David Ralph. I know how particular Cincinnati hospitals are about having the correct official name. 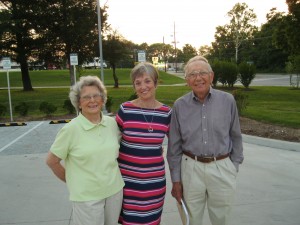 “Do you know him personally?” I couldn’t resist asking.

“Oh, yes! I grew up in Shackle Island, too,” she answered.

“Well, I’m Onezima’s daughter Lanita,” I told her. We proceeded to have a nice chat about old times on Long Hollow Pike. I finally got his phone number and moved on. Only in the South!

His wife, my dear Aunt Betty Ruth, answered the phone and gave me detailed information on his condition. The pneumonia was worse Sunday but they think he’s better now after getting two units of blood. She thinks he’ll be able to go home in a couple of days. She was precious to talk to.

Uncle L.D. and Aunt Betty Ruth are the first relatives I distinctly recall. They lived in a tiny trailer, the government’s version of married student housing, near the campus of Middle Tennessee State College when he was going to school there after World War II ended. My dad was also finishing his degree at MTSC, and Aunt Betty Ruth kept me when Mother was able to get a substitute teaching job.

Uncle L.D. was a big tease. He kept all kinds of candy in the glove compartment of his car, and he would ask if I’d like something from his “store.” We’d have an elaborate play of choosing and “buying” the candy I wanted. I loved it.

When I was older, Uncle L.D., an art teacher, would ask me to draw something for him. My drawing was pathetic and he told me so bluntly. “Trees do not look like lollipops!” he would yell, to my mortification. I was a bit scared of him, but then he gave me a book on how to sketch scenes, animals, and people. I adored that book. From it I learned how to sketch with perspective.

Finally I got my first pair of glasses and could see things farther than ten feet away. Then I realized that he did know something after all about how trees were shaped! Until then, they looked like lollipops to me.

Which brings me to the idea of perspective. I’ll hear someone say, “It’s only ten bucks!” and I think, “Wow! That’s ten dollars.” There is nothing more personal than one’s perspective—on anything.

Uncle L. D.’s perspective is that he’s as good a driver as he ever was, but he’s probably the only one with that perspective. His doctor gently suggested that he should not be driving on interstate highways, giving him a different way to see it—chances of a stroke or heart attack at high speeds—from any Uncle L.D. had considered.

One way of being less judgmental of another is trying to see the situation from his or her perspective. Once we make the effort to see that other point of view, our reaction can be much more realistic—and compassionate.

What change in perspective have you had lately?