Through my father-in-law, I learned that “old” is ten or more years older than the person speaking. At age 75, he would bemoan getting in line “behind all those old people.”

So I spent last week with old people–very revealing.  Steve and I drove to Middle Tennessee, home of my youth, and visited some of my aunts and uncles there. You can already understand the term “old people” since they are my aunts and uncles. Steve has none left. I have six uncles and seven aunts still living–and most living very well. Only one–of course, an uncle by marriage!–is in a nursing home. All the rest live independently in their own homes.

After so many years of being related, for the most part “in-law” is a moot term. They are my uncles and aunts, period. In fact, I’m fonder of some of those who are related due to marriage than those related by blood. 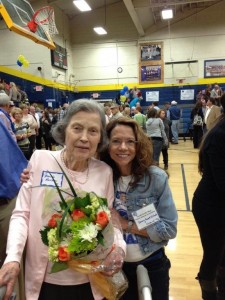 First we visited widowed Aunt Juanita, age 93½. What a spunky gal! She was recently given flowers for being from the oldest class at the class reunion for Goodlettsville High School–out of 1500 people there. She was quick to clarify that she wasn’t necessarily the oldest person there.

Then to see Uncle L.D., 92, who had to come in from mowing his yard. We chatted with Aunt Betty Ruth, 88, and him, who told us about his adventures in WW II and that he’d wanted to marry her before joining the army but she was only 16. Fascinating. They’ve been married 68 years. They married the day before my first birthday and spoiled me greatly in my early years.

The next day Steve fished with Uncle Tommy, 80, for six hours on Old Hickory Lake. Boat in, boat out, etc. Caught a few. I spent the day with Aunt Deba, 80. She was always the youngest and most glamorous of the “Ralph girls.”  She’s the only person I know who wants her children and grandchildren to call her by her given name. She says, “Your name doesn’t change just because you become a mother or a grandmother!” Also very talented, that day she was choosing which of her framed paintings to put in a local art show. Her art teacher had requested that she submit some, and she carefully put “NFS” on each.

“Why, I don’t want strangers buying my paintings!” she answered. She has given Steve more than one, over the years. She has never given me one. I guess I’m to share Steve’s.

Our lunch table was elegant, lunch delicious. Mother would have approved. All the Ralph girls have strong opinions about everything–food, manners, politics. It was primary election day, and Aunt Deba explained that she would not be voting because only Republicans were running. Unlike Kentucky, you do not have to register for a certain party; anyone can vote for anyone in the primary. I suggested that she could vote for the “lesser of the evils” since a Republican was going to win. The very thought horrified her.

I called about visiting my dad’s brother, 98, but his wife discouraged my coming. Since he has Alzheimer’s, I knew he would not remember my being there, but I wanted to go. He and his first wife (who died at 62) were always so precious to me. He’s been married to this one for 32 years–and she’s still the “new wife.” But we appreciate so much the care she gives him.

That night we took Aunt Mina, 82, out to dinner. She is wearing out with being at the nursing home every day with Uncle Ollie, 88, who has good days when he is lucid and others when he is not. The day we visited him was not a good one.

Our dinner conversation went downhill rapidly when she started in on politics. She and Steve have never seen eye to eye politically,  and this wasn’t the worst of their conversations. Of course she had not voted because she wouldn’t vote for any Republican. Steve mentioned that he votes for the person, and she was appalled. She lectured Steve on the importance of voting for the party–in this case, the Democratic Party.

Then we traveled to the Smokies, staying at the quaint, fifties-type Marshall’s Creek Rest Motel in Gatlinburg. The city and the Great Smoky Mountain National Park were swarming with old people! On the rare occasions we saw a young couple or children, we were delighted–except for the one crying at dinner.

As we were walking down the street one day, we changed to single file to let a middle-aged couple pass. Instead, they stepped out into the street, and she said, “After all, we are a  little younger than you!” Her emphasis on “little” implied that she really thought “a lot.” It took us a while to get over that. Honestly, we still are smarting from it. We obviously don’t feel our age as much as we look it to others.

So what a week with old people! And, as Pogo, oft quoted by Aunt MIna, famously said, “We have met the enemy and he is us!”