Yesterday I went to prison—Indiana State Prison, to be exact. Fortunately, I went as a visitor, not an inmate, but the impact was still remarkable.

Michigan City, Indiana, is about a five-hour drive from our house. We picked up Mac Reeves at 7:30 a.m. and headed for Indiana. We were on our way to visit his brother Vaughn. In 2009 he turned himself in for a misunderstanding with the SEC, thinking he’d be out in a few days. Instead he was sentenced to 57 years by a local court and is in a maximum security prison. 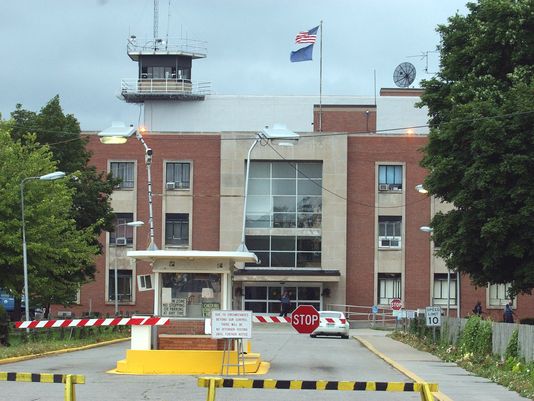 Of course prisons look foreboding from the outside, with their stern walls topped with barbed wire. But we were able to park in a nearby lot and walk right in the front doors. At the desk, a nice man asked for the number of the prisoner we were visiting, took our drivers’ licenses, and kept them while we were there. He took Mac’s and checked him in quickly. He frowned at my driver’s license (not many visitors from Kentucky, perhaps) and asked, “First time here?” At the affirmative, he typed into his computer all the information on my driver’s license. Then it was Steve’s turn. The man gave us passes, nodding curtly, and we went to a seating area.

Mac said, “Now we wait till they call us. They have to find Vaughn wherever he is and bring him to the room where we’ll meet. And better go to the restroom. None in there. And if you leave you aren’t allowed back in.” We put our keys, sunglasses, and wallets in a locker and Mac kept the key—the only item allowed in the meeting room with us except for $20 in quarters.

We were called in about ten minutes, for Vaughn knew we were coming about that time and was waiting to be summoned. I had read the rules and understood no jewelry except wedding rings, no sandals or flip-flops, no cell phones. We’d left cell phones and watches in the car. We had to go through security much like at an airport—off with shoes, belts, etc., but we were each patted down and I even had to throw my tissue away. (A sacrifice for me!)

A large sliding door opened and we walked through. It shut behind us and we stood in front of a smaller metal door until we heard a buzzer. Then Mac pushed that door open and we three went through it. Waited in front of another metal door. Buzz. Mac pushed and we entered a crowded room about the size of a classroom.

Vaughn Reeves came toward us wearing a huge smile, tan shirt and pants, and thick black work shoes. We hugged and then sat on flimsy chairs facing a little table—actually a rectangular solid about two feet tall and 18 inches square. Couldn’t have tipped it over if we’d tried.

We chatted a bit and then Mac offered to get our lunch. He and I had each brought our 80 quarters. Steve and I went to the vending machines to check what was available. Nothing looked tasty—hamburgers, chicken sandwiches, pizzas, chips, soft drinks, bottled water. Two microwaves were nearby. I returned to sit with Vaughn while the guys got our lunch, such as it was. Each sandwich is $5, so putting in 20 quarters for each sandwich took a while. Soft drinks and bottled water were $1 each. Later we saw an ice cream novelty vending machine across the room, but we didn’t indulge.

A matron was at a high booth by the door through which we’d entered, keeping an eye on us all and signaling the front desk when a prisoner had arrived and his guests could come in. After two hours, she came over and wanted to know if we wanted to stay longer. We said yes, knowing that the rule was two hours. She allowed us to stay another hour.

Lunch was delightful not for the food but for the conversation. We all talked easily about what we’d been doing—VBS, for example—and our trip over. He asked about our trip to Canada and our upcoming mission trip.

I quizzed him about the “honors” section that he’s in now. Instead of being in cells, each man has his own little cubicle with walls about shoulder-high. So he has some privacy when he’s sitting down, but can see all over the room when standing up.

I asked him if he gets paid for the jobs he does. He said, “Yes, I am one of the highest-paid inmates here. I get 25 cents an hour. Takes it a while to add up.” And he grinned. Even though he should be drawing Social Security, he cannot while he is in prison. If he gets out, he can start drawing, but he’ll get no back pay for his years in prison.

We told funny stories and I loved seeing him laugh. He has a great laugh and shakes all over.

Seeing the other inmates and their visitors was interesting, too. One man played various games with his two little boys. Another couple played cards. Often the relationships were obvious—wives, mothers—but not always. One man talked incessantly, hungry to share his life with his visitors. Several ate from the vending machines. I could smell the pizza but it didn’t look appetizing. The inmates seemed to greatly enjoy the food, so different from their usual soy-based, high-carb menus.

His quiet and pleasant demeanor plus his quick wit has earned him many friends “inside.” Several big guys are his volunteer bodyguards when needed.

This was almost the only visiting room for the 2200 inmates. He said the other one has the glass barriers as we’ve seen in movies and television. Those are for the more dangerous prisoners who also have to wear red or yellow instead of the usual tan. He knows to steer clear of men in those colors. A new version of the scarlet letter!

The three hours went quickly. Finally we had to leave. We hugged again, and Vaughn went out through a small door to the side. We stood and waited. I could tell we weren’t allowed to leave yet, but I didn’t know why.

Mac saw that I was puzzled and reminded me of what he’d told us before: “They have to search Vaughn and clear him before we can go.” How sad!

We finally were allowed to leave. The matron opened the first door. Wait. Buzz. I opened the second door. Wait. Buzz. The third door slid open and we were out. We picked up our drivers’ licenses and got our stuff from the locker. “Have a good day!” the man at the desk said. But could Vaughn?