One of the most interesting experiences we’ve had in home ownership recently is getting bids for a new roof. We have lived in our house 34 years and never had to replace the roof. That in itself is rather intriguing to roofers we talked to.

As I was on my morning walk in Fort Thomas one day, I saw this sign for American Home Tech, Roofs for Troops. 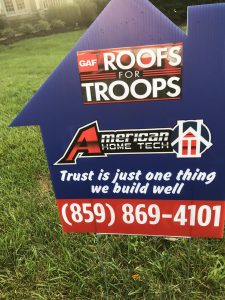 I called the number on August 2 and was told someone would contact us. The very next morning, a Saturday, a nice guy named Ian called, came to climb on our roof and look around, and talked to us about it. His idea was that insurance should replace our roof due to wind damage and he would meet the adjuster to point out the wind damage. We thanked him and told him we would get back to him when we decided. He left a folder about their work. GAF certified.

Rest of the story on Ian: He kept calling me at all times of the day for about five days. Finally I told him we were not going to make an insurance claim and what I wanted from his business was a bid on how much they would charge to do the job. I told him I didn’t want him to call back until he had a bid to give us. That was about six days ago, and I have not heard from him since.

I still had the sign in my garage from the business that had replaced our windows:

I called LEI and they scheduled someone to come. Turns out that it was two very nice young women who just walked around outside and looked at satellite pictures of our roof. They came inside and gave us a lovely spiel about the high quality of their jobs. She gave us dollar amounts that other companies would charge to give that fine a product, starting at $56,430, ending with their “highly discounted” price of $16,768. I told them I’d call them one way or the other. GAF certified. 50-year guarantee.

Meanwhile, on August 5 Steve met with Shawn Foster, highly recommended by our realtor.

He and his men climbed all around on our roof and the next day we received his bid for the job. Very professional, all itemized as to what he would do. 30-year guarantee. $9,950. Owens-Corning Preferred Contractor.

I called our insurance guy about the likelihood of Safeco actually paying for a roof that was over 34 years old. What seemed the most significant to me was that if we filed a claim and Safeco didn’t approve it, it still goes on our record as a claim filed. We had two claims in 2015, and three claims in five years is a red flag that would probably cause our insurance to be dropped. So we were getting even more confused.

Finally, today our roofer guest, Jesse, was from Any Weather Roofing of nearby Wilder, Kentucky. Our insurance guy suggested him as being reliable and doing a good job. I asked Jesse to look at the roof with two intentions:  if it has enough damage to file a claim, and how much he would charge to replace the roof if we didn’t file with insurance. He walked all around on our roof and returned with his verdict.

He saw lots of wind damage to the roof, with only the fact that it had two layers of roofing on it saving us from a mess. (Kentucky no longer allows two layers of roofing. All layers must be removed and a new underlayment and roof put down.) He also mentioned hail damage because he saw “dings” on the metal caps on the chimneys. He said the big hail storm on March 2 probably did it. We have six months to file after the damage.

He said he used to be an adjuster for Safeco! So, assuming he’s being honest, he should know what he’s doing. He feels that we have an 85-90% chance of getting insurance to approve replacement. As Ian had done, he volunteered to meet the adjuster here and point out what he’d seen. If we don’t file, he’s guessing it would cost $18-20,000. He said if we choose not to file, he’ll send us a bid by Thursday. GAF certified.

After much debate and discussion with our insurance guy, we decided to file. After all, that’s a huge amount to pay out of pocket, even if we go with the $9,950 one.

So an adjuster is to call tomorrow and Jesse will come meet with him. I guess we’ve finally settled on Jesse as our roofer. But if the insurance claim is denied, we’ll probably go back to the one that’s under $10,000. 30 years is certainly long enough for us!

I must say that all these people were VERY nice and accommodating to us. They were methodical and careful and patient with our questions. Over the years, we’ve often tried to get people to come give bids on various projects and these were the most responsive and knowledgeable we’ve ever had.

Too bad our house is so tall and surrounded by so many trees that our investment will hardly be visible to anyone! 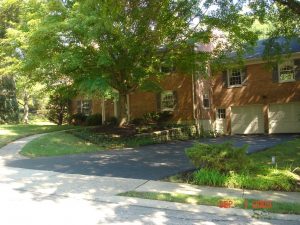